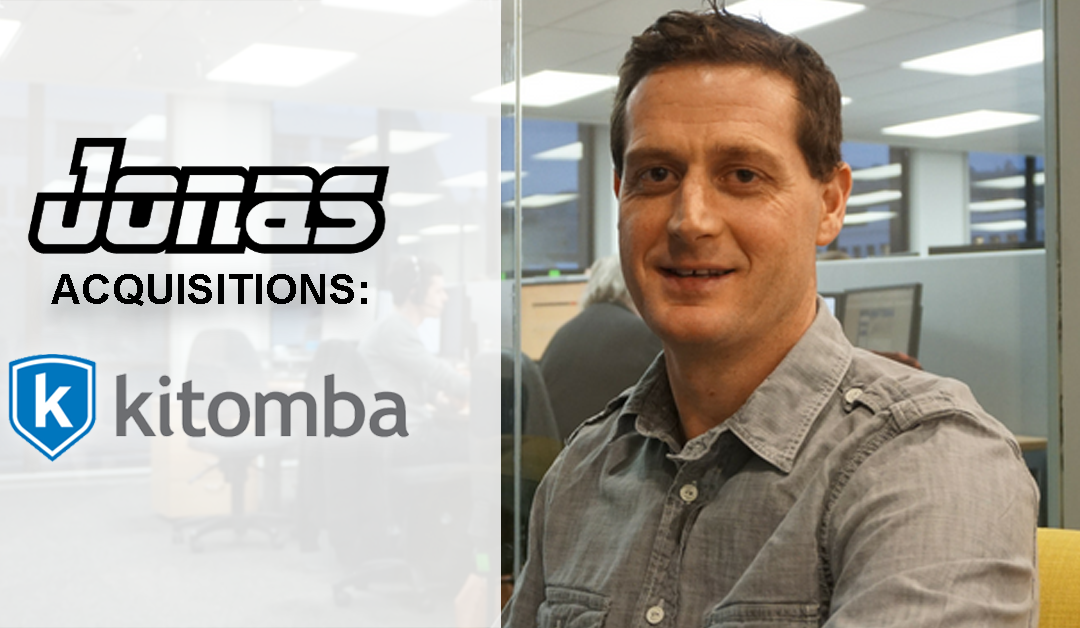 We recently caught up with Al Quinn, one of the co-founders and most recent CEO of Kitomba – a software company focused on the hair & beauty industry that Jonas Software acquired in 2014. Over to you, Al:

Can you briefly describe what Kitomba does? You were one of the co-founders – why did you start the company?

“We began in text messaging. Back in early 2000s text was the trendy tech so wanted an application that played in that space. We built a calendar that incorporated text message reminders for appointments and set out to find the nail that needed our hammer.

Over time we gained a number of customers in the hair and beauty space and as we found out more about the industry we discovered a need for a more fully-fledged salon management system. At that point we pivoted from reminder software into hair and beauty software.”

Can you briefly describe your diverse history/roles at Kitomba pre and post-acquisition?

“I was always the tech guy. Tom [Kitomba Co-Founder] ran finances, business development and was the CEO. My role was to write and support the software. Tom and I set strategy and made high level product design decisions collaboratively. As we grew and hired more developers, I stepped away from day to day coding and ran the development team.

Once we got larger (dev team of 15 plus), we hired an industry veteran to take over running R&D and I moved into an architect role with a side of “do whatever it takes to keep things running smoothly across the business.” I’d like to think of my title at the time as the “Chief Go-To Problem Solving Guy.” I was in this role at acquisition time.

Post-acquisition I moved briefly into onboarding to fill gaps there and then navigated back to dev as the product owner. Three years post-acquisition Tom left and I took over as CEO, where I was for almost four years.”

Jonas acquired Kitomba in 2014 – why did you sell to Jonas?

“Basically, to de-risk and take some money off the table –  we had grown the company and still believed it had room to grow but wanted to reap the rewards and let someone else take on the financial risk. With a young family at the time, I gladly swapped guaranteed money now over “possibly more money later.” We also both had other longer-term projects that had been percolating in our minds that we wanted to progress one day.”

Can you describe life at Kitomba after the Jonas acquisition?

“Less stressful than before acquisition. Day to day not much changed. I still loved the company, my role in it, and the people working there but I didn’t wake up in cold sweats at night whenever a competitor made an aggressive move or when a problem arose.

Longer-term it opened up more career opportunities for me. The learning gained via Jonas best practice sharing events (like Jonas Software Academies & Jonas Software Universities) plus the support and resources available meant that when the time came I was able to move from a historically technical role into the much more business-focused role of CEO.”

What advice would you give to other founders thinking of selling their business?

“Don’t just focus on the number. The way Jonas keeps the business running means there are opportunities beyond a pure cash exit. For me, being able to learn, grow and get new experiences was great.

And imagine what it would be like not to have those wakeful nights of cold sweats. For me, that was an unexpected but very nice outcome. Until we actually sold and my entire life stopped being defined by the fortunes of Kitomba, I didn’t realize quite how deeply wrapped up I had been.”

You have recently left Kitomba to pursue another adventure. Can you briefly discuss?

“I’m pursuing a lifelong passion of mountain bikes and co-own a mountain bike manufacturing business called Zerode Bikes. Some of the money from the Kitomba sale went towards buying into the business. Even though manufacturing is a bit different to software, the business tenets are still pretty transferable.  I’m also hanging out with my kids a bit more and riding my bike lots.”

Thanks, Al for sharing your experiences. If you own a software business, we would love to learn more about your company. Feel free to reach out to learn more.