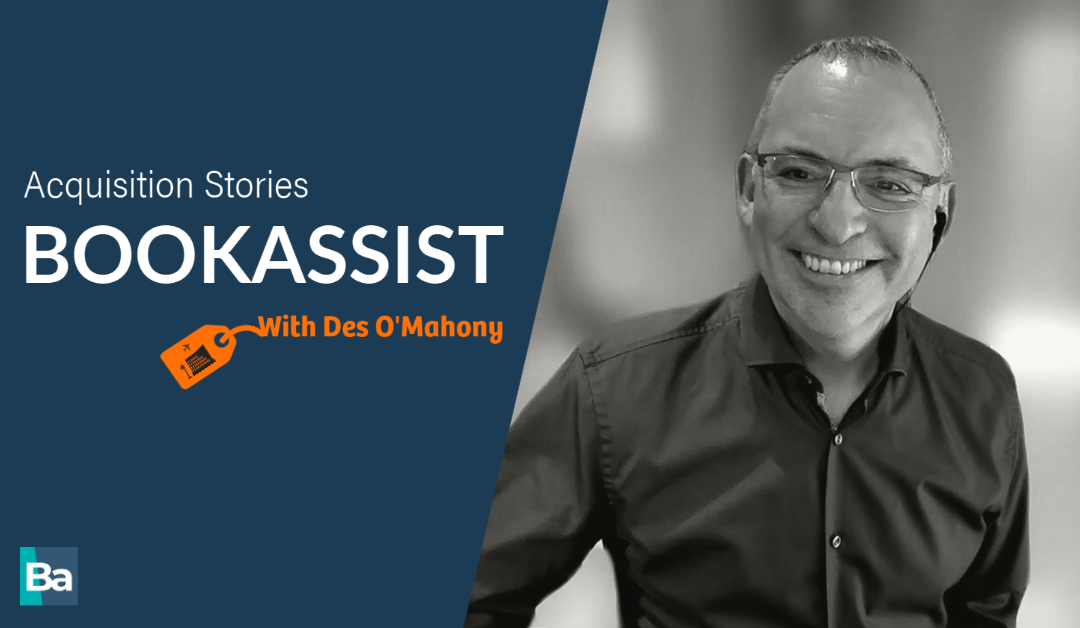 We caught up with Des O’Mahony, CEO and Co-Founder of Bookassist, which Jonas acquired in 2017, to discuss the acquisition process for Bookassist and what life looks like post-acquisition.

Des, thank you for taking the time today. Can you give us a little background on Bookassist?

Bookassist serves the independent hotel sector, boutique hotels, or small groups of typically 10 to 20 hotels. It’s those kinds of hotels that are digitally-savvy already, but they don’t have enough of a digital team in-house to run their own strategy, not like the large chains would have or the large franchises.

We work to develop the online strategy with those hotels, the full funnel from customer capture right through to booking. Then we implement that strategy with them with our software.

How did you discover Jonas Software, and how were we compared to other acquirers?

Jonas Software really discovered us rather than the other way around. The M&A team had been in touch with me on an ongoing basis every six months or so and had been reasonably persistent to have conversations. I have to say when they were initially in touch with me, I wasn’t that interested in the process in general.

It had nothing to do with Jonas, but I wasn’t thinking in terms of either investment or acquisition of the business. But because that dialogue had built up over a number of years, then it was far less of a surprise for me to jump in and get involved when the time came.

Why did you decide to sell to Jonas?

Initially my push was to see if we could get an investor who could buy out some of the shareholders and then invest in the company and move it forward. The more discussions I had, the more I realized that I would lose control of what the ethos of the company was.

A lot of people were interested in buying the company because it had been successful. But a lot of it was about breaking up the company or about an asset buy, where they would buy the contracts, but most of the staff would be sent home. And while some of the offers were lucrative in and of themselves, I didn’t feel good about what would ultimately happen with the company.

The discussion with Jonas, however, was very different. If you want to continue running the company with your strategy and your ideas, then you can do that and we can safeguard the future of the company. Jonas has never sold companies. All of those things really appealed to me. I had no idea that that kind of model actually existed prior to those discussions. Once I was made aware of those options, it quickly became apparent that this could be a very good solution for everybody.

Can you describe your experience with the pre-acquisition process?

The process actually turned out to be relatively short from the very first kind of proper engagement meeting, which was in August of 2017, to closing the deal in December 2017. The primary thing that stands out for me about the whole process was the fact that there was very strong and open discussions at all stages.

I had seen before in many kinds of Venture Capital scenarios where a really nice carrot is dangled and then by the time you get to the end of the discussions it has been whittled away. It was an honest and open discussion from day one and a very positive discussion. It also focused on how do we now build the business to the next level, not just what’s your business doing, what’s it worth, but what are we going to do afterwards and where does it go?

This leads into my next question. Can you describe life at Bookassist after the Jonas acquisition?

In one sense, it didn’t change much day-to-day and still hasn’t changed an awful lot. For most of the employees, it wouldn’t have changed significantly. The biggest immediate impact was that we needed to change accounting systems pretty quickly and accounting practices. That is a result of the fact that we were a small standalone company.

Jonas is part of Constellation Software Inc. It’s a publicly-traded company. The numbers from our business would roll up into the parent company. It was moderately painful to have to go through the process of changing it, but mostly for the finance team, not for me personally or for any other employee. That had to be done quickly within the first quarter.

Once that was done, one of the things that was great about it was the vision it gave me on my business, which was completely different from the vision that I had on the business previously. Again, because of the way that Jonas structures their accounts and the way that they structured the KPIs that come from those accounts, I was able to get very good insight into the performance of my business in a way that I had not seen before.

Despite the process itself being an immediate all hands on deck to get this changed quickly in the first few months, the result of it was very positive for what followed.

At Jonas, we often talk about our ABCs as differentiators. We have autonomy (our decentralized operating model), buy and hold forever (we never sell, which allows us to invest for the long term), and our culture of sharing best practices (learning from the Jonas or CSI family of software companies). How has your experience aligned with these differentiators?

They have been very key. I’ve touched on a couple of them before. I’ll start with autonomy. One of the key issues for me was to be able to continue with the kind of strategy and approach to the marketplace that I was interested in. There’s a lot of strength there to be leveraged, and Jonas recognized that and they let the business leader fulfill those dreams where that leader wants to do so, and I think that’s important.

That autonomy is given. The overhead on that is relatively light touch if you are delivering on your numbers and you are pushing forward. Interestingly, if you’re not delivering on your numbers and things may not be working, the approach there from the portfolio level above me is how do we step in and help you? It’s not a criticism issue. It’s more how do we all work together here to get that business moving?

That’s really one of the key points that probably goes to your third point about that culture of delivering best practices. If something is not working, then you know that you can fall back on so many other people who’ve been through problems or issues in their business and have dealt with them either positively or negatively, and they can share that experience with you. There are literally hundreds of people that you can tap into within that family that you couldn’t have done as an independent business.

From a personal perspective, it’s been a very strong learning experience for me in terms of how business is run, because prior to this, I had no business training. I was running my business. It was successful, but it was really how I felt about things should be done. Now, being able to tap into that community, I’ve learned an awful lot more, and it’s been a huge learning experience for me.

What tips and advice would you give to a business owner thinking of selling their business?

When it comes to the actual question of selling your business, I think the business owner needs to know why they want to sell and be honest with themselves. Sometimes you simply want to sell because you want to make some money, and that’s fine. But a lot of people don’t want to say that. They want to talk about other things. I think the honesty with yourself about why you want to make this step is important. And it’s perfectly fine to say, I’m getting older, I want to sell the business or I want to move on and do other things. The first thing is being honest about what you really want with yourself and the other stakeholders / shareholders.

The second one is that when you get to a process it’s critical that you know your numbers and that you cast everything in terms of the impact on the numbers. I often see companies where, like myself, you have technical people who have a great passion for the product that they have, and they will talk for hours about why it’s great and how it does this and how it does that. But the bottom line is unless that passion drives numbers in a positive direction, then it’s a misguided or a misdirected passion. What is important is that everything I believe about my business translates to numbers. You have to know your numbers and you have to know the direction they’re going in.

Finally, I would say that I think it’s really important to be honest in the process itself. If you have positives, you should speak them up. But if there are negatives in the business, you should probably get them out pretty early and say, OK, here’s a negative. How are we going to solve this one and fix it? If you try to hide stuff, then all you were doing is saying that by the time you get to the end of a process, something suddenly comes out and you have destroyed a trust that you’ve built all the way through a process. You more than likely will get a reduction in valuation because it looks like something is not the way it initially seemed. More importantly you may actually damage the rapport that you’ve built up with people during that period.

Thank you Des O’Mahony for sharing your experiences. If you own a software business, we would love to learn more about your company. Feel free to reach out to learn more.